Search
Who is online?
In total there is 1 user online :: 0 Registered, 0 Hidden and 1 Guest

» if you need help your self

The chess piece known as "queen" is (Persian) farzīn also vizier. It became (Arabic) firzān, which entered western European languages as forms such as alfferza, fers, etc – then later it was replaced by "queen" - possibly brought to West by British during the British rule of India; aince the Indian equivalent of "queen" is rani.

(fig. 7) Fragment of a Chess piece, probably the head of a King, found at Afrasiab, ivory 7th-8th c. 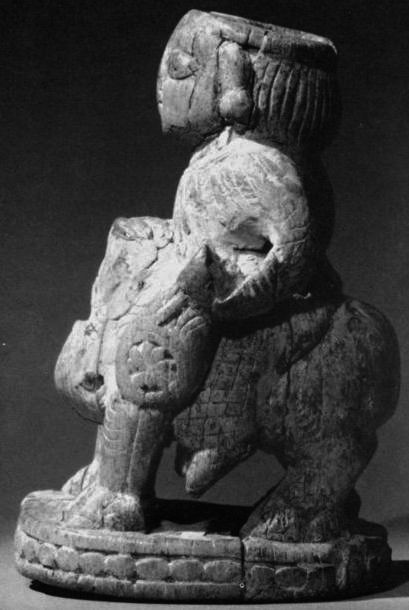 
Historical and Literary Evidence
Pre-Islamic written references to Chess or its development have all point out to it Iranian origin, in particular to two Persian records of about 600CE. These documents have solidly connected chess with the last period of the Sasanian rulers in Iran (224-651 CE).


The "Karnamak-ī Ardeshīr-ī Pāpakān" (the Book of Deeds of Ardeshir-e Pāpakān), an epical treatise about the founder of Sasanian dynasty, mentions the game of "chatrang" as one of the cultural accomplishments of the Ardeshir as a young prince. It has a proving force that a game under this name was popular in the period of redaction of the text, supposedly during the reign of Khosrow II, Parviz (r. 590-628 CE) - the work could have been composed as early as 260 CE.


The third and final Pahlavi text is known as Khūsraw ud Rēdag (Khosrow and the Page). It mentiones together with other games in chapter 15 of the (ud pad Čatrang ud new-ardaxšî r ud haštpay kardan az hamahlan fraztar hom "and in playing Chess, backgammon and the hashtpay, I am superior to my comrades" (Unvala, p. 16; Monchi-Zadeh, 1982, p. 65; Panaino, 1999, p. 51). It seems the story was taken place at the court of Khosrow I, Anūshakrūwān (Immortal Soul - r. 488–531 CE) and states that chess is one of the cultural disciplines that a noble should learn.


Ferdowsi the greatest of Iranian epic-poets wrote also about it in the 10th century, but his sources are solid and form a continuous chain of witnesses going back to the middle of the 6th Century in Iran. He describes chess as arriving from Hind. According to Iranian historical sources this name "Hind" was not used for India until after the 11th century. Here "Hind" means Eastern-Province of Iranian Empire including modern Sistan and Baluchistan, and while during the Achaemenid times it was extended to Khuzestan province.


As Bidev, the Russian chess historian pointed out, nobody could possibly generate the rules of chess only by studying the array position at the beginning of a game. On the other hand, such an achievement might be made by looking at Takht-ī Nard (backgammon), which is another Iranian game-invention - the use of dice also favours its Iranian origin. The world oldest pair of dice was discovered in Dahān-e Gholāmān located in in southeastern Iranian province of Sistan, which date back to Achaemenid period (fig. 12.).

The oldest clearly recognizable chessmen have been excavated in ancient Afrasiyab (ancient Samarkand), in Iranian cultural domains contrasts with the absence of such items in India. Afrasiab was under thy Islamic rule since 712, but were essential a Persianate land and society by origin. Some other old pieces, possibly Chess pieces, are the occasionally named chess pieces of an elephant and a zebu bull kept in Tashkent. They were excavated in 1972 at Dalverzin-Tepe (fig. 3), an ancient citadel now in Southern Uzbekistan, and stem from the 2nd century. The Russian Chess history expert Linder feels that they are not Chess pieces, but belonged to a forerunner of Chess. They could mean an earlier than previously assumed existence of Chess.


However, there are no chessmen there from early times in India, and only in the 10th century appears an indirect mention from al-Mas’udi: "The use of ivory (in India) is mainly directed to the carving of chess- and nard pieces". Some experts believe that old Indian chess pieces may be discovered one day! So far, this is mere speculation.


Next group of chess pieces (three chessmen) comes from. In Nishapur (fig. 6) another ivory set was discovered though belonging to later times, 9th or 10th century. These are not idols anymore and are carved following the abstract pattern which has been characterized as "Arabic".

Introduction of Chess into India by Muslims
Games upon the "ashtapada" board of 8x8, with dice and with two or more players may have served as "proto-chess", but the two types of games already differ too strongly in their nature and philosophy to make the evolution of "Chaturanga" into "Shatransh" a simple question of direct parentage via the Persian "Chatrang".


Muslim writers stated quite frequently that they took the game of "shatranj/sh" from the Iranians, who called it "chatrang". This happens in the middle of a political-cultural revolution, which has been analysed in historical texts.


The ruling Umayyad dynasty was overthrown by a certain Abul-Abbas, who initiated a new era around the year 750 - transferring the Islamic political centre from Damascus to former Iranian territory and Baghdad, which still was under Iranian cultural influence. The Abbasid dynasty was culturally and quasi ethnically of Iranian origin - so Iranian dominance became clearly the focal point in the cultural renaissance which took place inside the Arabic trunk. Large number of the previous knowledge from ancient Iran, Greece, Byzantium, Egyptian and Middle East civilizations was compiled and translated into Arabic. The new information absorbed in a scientific body which followed its further path towards the West. Chess was only a part of this knowledge, packaged together with earlier mathematical, astronomical, philosophical or medical achievements.


However, we know that while chess flourished in Baghdad in the 9th century, the earliest reliable account of chess-playing in India date only from the 11th century.

CHESS; Iranian or Indian Invention? ( I )

The Origin of Chess
Chess is one of humanities popular pastimes and has been described not only as a game, but also as an art, a science and a sport. Chess is sometimes seen as an abstract war-game – as a ‘mental martial art’ – and teaching and playing chess have been advocated as a way of enhancing mental prowess.
It is very unlikely that Chess, almost as it is played today, suddenly came into existence or invented by one person. The idea of it being a combination of elements from other board-games has merit. Since almost all known board games have religious backgrounds the astrological component is entirely possible, even though one prefers the version that all elements come from other games, as the basis for the counters. Iran as the area of origin is highly possible, especially because of the two excavated debated pieces from the second century CE, which were found in the area of the Iranian cultural realm.
However, "chess is an ancient game which is first mentioned in documents dating back to the early years of the seventh century A.D. and associated with North West India and Persia. Before the seventh century of our era, the existence of chess in any land is not demonstrable by a single shred of contemporary evidence" (Fiske, the Nation).

Various scholars have proposed various origins for chess: Bidev states that “chess comes from China”, while Samsin suggests that there was hybridisation of Eastern and Western games in the post Alexander kingdom of Bactria in c180-50BCE. Josten is geographically between the two of them, favouring the Kushan empire in ca. 50BCE – 200CE.
However, possibly the strongest – or perhaps most vociferous – arguments have come from those who consider that chess originated in the Indian subcontinent in around 600CE. This view was propagated by Murray and van der Linde in the late 19th – early 20th centuries, and has subsequently been supported by Averbak.
This brief paper examines some etymological, literary and archaeological evidence for the Iranian origin of chess – and so suggests that the question of the origin of the famous game is still unanswered.

(fig. 3) Elephant and Bull (or Knight or Vizier ?), ivory , dated as early as 2nd c., found at Dalverzin-Tepe. Their use is unknown, some scholars think they can be game pieces 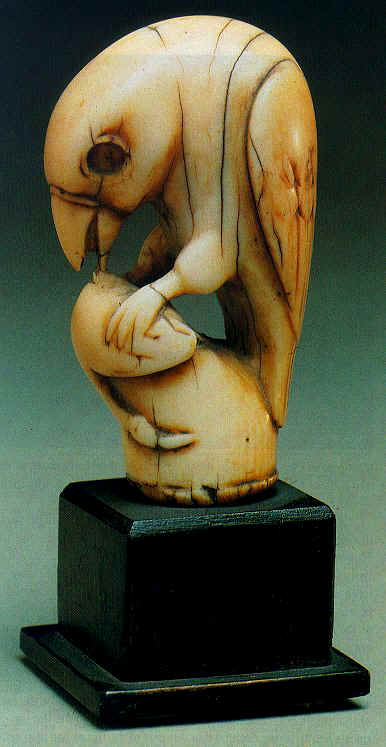 (fig. 4) A Rukh piece found in Ferghana 8th to 10th c.
Etymological evidence
Various names have been, and are now, used for chess-like games. Chaturanga, for example, is a chess-like game, but it is played on an eight by eight board (rather than the modern chess twelve by twelve board) and it uses slightly different pieces and rules to those in the modern game. It has been suggested to be a proto-game for chess, of Indian origin.
The word chaturanga means ‘quadripartite’ or ‘army’. This reflects the four components in Vedic army platoons, which are themselves reflected in the types of pieces used in the game. Ricardo Calvo notes that the first unmistakeable reference to the game of chaturanga is in the Harschascharita by the court poet Bina, writing between 625 and 640CE. The word’s early literary use and its origin in the ancient language of Sanskrit have been suggested to provide supporting evidence for the Indian origin of chess. Murray specifically suggested that the Pahlavi word chatrang – used for a game equivalent to the current chess – was derived from chaturanga.
However, one of the most etymological evidences can be identified in the terminology of chess pieces which are Persian such as Rook.
Rook which is a Western derivative of Rukh is another term for Iranian mythical bird Sên-Murv (Persian) Simurgh. In Irnaian literature (Avestan) Sên-Murv identified as Homâ and in Arabic introduced as Rukh. The Simurgh or Rukh, was depicted as a winged gigantic creature in the shape of a bird, that could carry an elephant or a camel. The functionality of the Rook piece in game of chess and its iconography in Iranian world is quite significant. The bird which Iranian believed imparted fertility to the land and the union between the earth and the sky. In India, the piece is more popularly called haathi, meaning "elephant".
Another hint is the nomenclature of the pieces, persistently related to different sorts of animals rather than to components of an army: In the "Grande Acedrex" of King Alfonso of Castile (1283) lions, crocodiles, giraffes etc. play over a board of 12x12 cases with peculiar jumping moves, and the invention of it is connected to the same remote period in India as normal chess. They are very atypical in any context referring to India (De Gruyter, p.).
Other chess terminologies are also deeply rooted in Persian language, such as “checkmate” (the English rendition of shāh māt, which is Persian for "the king is frozen") as well as “bishop” and “queen” pieces.
"Bishop" chess piece which is a western innovation, derived from the elephant, most likely in the 15th century - it is from the Persian pīl meaning "the elephant". In Europe and the western part of the Islamic world people knew little or nothing about elephants, and the name of the chessman entered Western Europe as Latin alfinus and similar, a word with no other meaning.
This word "alfil" is in fact is an Arabic loanword from Persian pīl < fil , and in turn the Spanish word alfil would most certainly have been taken from Arabic. Chess was introduced into Spain by Ali ibn-Nafi the famous Persian poet, musician and singer (also known as Zaryāb or Ziryab, “gold finder”) in the 9th century – it is described in a famous Libro de los juegos the 13th century manuscript covering chess, backgammon, and dice
Some argue that since one of the pieces are being referred to as "elephant", must of an Indian origin - on the other hand, elephants are not at all exclusive to India (Gowers, p.173 ff; Walbank, p. 205-6.). However, Iranians were the first nation that introduced cavalry and they had also foot-soldiers, chariots and elephants as well as river and battle-ships. In Egypt, the Ptolemaic Kings obtained elephants regularly from Somalia. Strabo (16,4,5) mentions the foundation of several cities in Africa with the main purpose of hunting elephants (Gowers, p.173 ff; Walbank, p. 205-6.). The English name "bishop" is a rename inspired by the conventional shape of the piece.